"A lot of rocks lying around so probably not too safe"

Sisyphos:
Sisyphos is a nice grey vertical wall offering over 40 routes from 5a to 7c. The pitches are about 20 meters long and mainly technical with crimpers and small pockets. The area is quiet and comfortable and the equipment is good.

Athos:
6a+ to 7c routes and a lot of projects on a vertical limestone wall, this is the curriculum of Athos. The crag is rarely frequented but has a good potential. The base is ok and also the equipment is fine. The approach is not so children friendly cause there are some fixed ropes that must be used while following the trail. All the projects can be tried without problems.

Sarche:
Sarche is composed of three small sector, having in common a nice grey and compact limestone. The routes are mainly vertical and technical and goes from 5c to 7b.
The crag is rarely frequented, but the routes are nice.

Note: the Sarche topo has three pictures, the first shows the northernmost sector while the last the southernmost one.

Muro dei meridiani:
This crag offers 7 short multi-pitch routes on a nice grey-red rock. All the lines are nice and requires only 60 meters ropes and quickdraws. For the routes on the right it is recommended to be experienced on alpinistic routes. You have to rappel down from routes 1 to 4, while to come back from the others it is possible to top out and follow an evident path indicated by stone pillars.

Panoramica:
Panoramica has a nice yellow wall, which is mainly vertical and offers long routes from 6a to 7b. All the lines are nice and well bolted.
The crag base is ok, but the approach could be not so easy for children. Pay attention to the extreme right part of the base, cause it is very exposed.

The landscape is breathtaking over the Sarca valley and Toblino lake. For this reason the routes names were given by taking inspiration from the world of photography.

Il posto delle fragole is strangely little frequented, even though the few routes are nice and the landscape is beautiful.

Sisyphos:
The crag was bolted by team Sisyphos in the 90’s. Sisyphos was a group of local climbers including Danilo Bonvecchio, Rolando Larcher, Fabio Leoni, Michele Cagol, Roland Galvagni and Marco Curti.
If you look closely at the bolts you will see the symbol of the team.

Athos:
Athos was discovered by Edy Boldrin and Giacomo Damian who also set up the major part of the routes. Danilo Bonvecchio also helped with the work. The routes set up dates back to 2004.

Sarche:
The crag has different developers, the known are M.Curti and G. Di Matteo.

Muro dei meridiani:
The crag was developed by R. Galvagni and D. Filippi.

Panoramica:
Panoramica was discovered and equipped by Michele Cagol and Fabio Leoni of Vertical Sport shop. 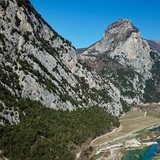 N. Trenti
from Arco Italy
Other Premium topos by Arco not normal 153