in the area of Repoveden kansallispuisto, Finland Maintained by Team Access

"Entirely at own level in Finland. Especially for trad climbing. Beautiful well equipped camp site right next to cliff and fun climbing society at least during weekends. Repovesi National Park is great place also for other outdoor activities as hiking, paddling and cross country running."

Olhava is the place to climb in Finland! Olhava is situated in Repovesi National park beside a small little lake and the setting is breathtaking!

Most climbers come to Olhava for the routes on Laatta sector. Laatta is a slab of 38 meters height and 80 degrees inclination. The climbing on Laatta is on small friction edges with some stellar cracks. All routes on Laatta would get full 3 stars on any crag. In the middle of Laatta sector rises the Kantti (6a+) pillar which is probably the most sought after and feared route in Finland. Leading Kantti is full-on exposure with stellar climbing!

The climbing on Olhava is mostly trad climbing with some odd bolts. All anchors are bolted. The routes are mostly safe unless otherwise specified but the protection can be spaced sometimes. The protection in-situ is of good quality glue-in bolts.

In mid 1970's rock climbing was unknown sport in Finland. There were only a handfull of climbers but they found Olhava. The first routes were ascended on aid which was the norm on those times. Before 1980's norm had changed and all the main cracks were ascended free. In mid 1980's with the evolution of bolts and sport climbing climbers started to ascend the faces between cracks.

The iconic route Kantti (6a+) was ascended in 1984 and by modern standards the bolts may feel spaced. There are also odd trad placements between the bolts which was the norm those days. The original bolts have been replaced later but the character of the route has been left untouched. This is also the case on other routes on Olhava.

With the evolution sport climbing some obvious and logical sport climbs have been added. Oma Planeetta (8a+) would be the most popular of the hard sport climbs in Olhava. 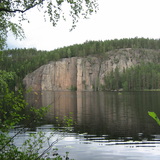 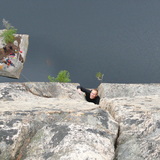 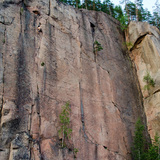 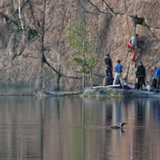 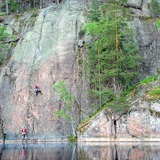 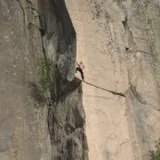 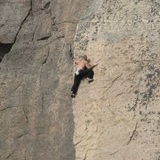 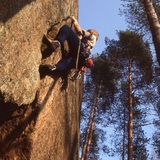 Olhavanvuori is situated in the Repovesi National Park. Finnish Climbing Association has good co-operation with the park admistration and we like to keep it that way. Please act politely! Take your trash and all other trash with you!

The walk-in is shortest from the north parking. It takes about 30 minutes on good roads. There's a well near the climbing site where you get water for cooking. Sometimes the bacteria can be too high for drinking, though. If the trash bins on park entrances are full or locked take your trash with you back to civilization.

During spring and summer many birds nest in Olhava.

- Raven (korppi, Corvus corax) is known to nest between routes Puntari and Sammalränni. If you see a raven nesting here or somewhere else, please climb other routes.

- Kaakkuri (Gavia stellata) is known to have a nest in the middle of the Olhavanlampi pond on her own small little island. If you're a bad sleeper, please use earplugs. Kaakkuri is sometimes giving loud sounds during the morning hours and she has every right to do so! This is her territory.

There's a climbers boat courtesy of Finnish Climbing Association. You may use it as long as you don't break it. If you need to climb beyond sector Laatta (ie. Stradarotta or Tulenarkaa sectors), please walk the path from above. On good summer days the boat has high demand for pendeling between the shore and the Laatta island.