Great sport climbing crag, and the outdoor climbing gym number one in Stockholm. The routes are about 20-25 meters long, mostly overhanging, and offers plenty of bolted sportroutes in all grades and angels, many of them considered the best climbs in Stockholm. The routes are often sustained and pumpy. This is a very popular crag and there are always people here, but don't worry, there are room for everybody. The south wall is quite long and even tough you have to scrable upward in steep terrain the wall keeps It's hight almost all the way to the last route. Bolts are everywhere and some routes have an insane number of variations and linkups (route finding could be demanding). Somewhat crappy rock here and there, and it's not a very beautiful wall, but it's a whole lot of fun. On Svaväggen where the easiest routes are, the quality is better.

Stones of different sizes quite commonly fall down from the wall when routes are climbed, so watch out if you bring your kids. Also, wear a helmet.

This is a very accessible crag with plenty of parking space and a easy and short approach. It's also easy to get here with public transport.

Environment:
The main wall (Sydväggen) is southfacing and gets quite warm in summer, but late afternoon and evenings works good. Trees gives shade only here and there. Mostly block terrain at the base of the rock.
The easier routes on the west facing wall might be a bit slippery on hot summer days. Svaväggen is located along i little road, so be careful not to step out on the road. Remember to climb gently and avoid tearing down gravel, rocks or branches on the road. It might hit your belay partner or people passing by on the road.

The first activity on this crag was a Aid route (Nattskiftet) that was put up on the lower part of Sydväggen. It was made in complete darkness by Jan Liliemark, Björn Bergström and Christer Åstrand. The first free accent was made in 1982 when the route "I stället för Lidingöloppet" (trad) where climbed by Lars Grankvist. After that the activity accelerated when Eva Selin and Anders Lundahl in mid 80s started to develop the crag with some very nice classics. After a while Johan Luhr joined the party and made many nice and hard routes. Some of them were chipped and caused some debate among the climbing community.

For quite a long time Örnberget was considered a crag only for the strongest and best climbers in Stockholm, but quite recently Andreas Andersson and Peter Yakubenko started to develop Svaväggen. They did a hell of a job cleaning and bruching that very dirty slabface and came out with many well protected easier routes. Some rebolting has also been done on Västväggen and parts of Sydväggen, and thanks to that many forgotten routes now frequently is being climbed. 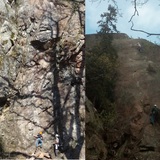 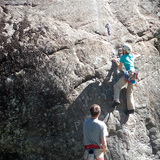 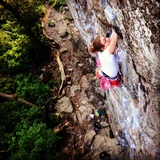 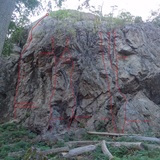 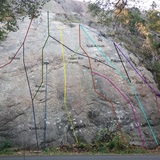 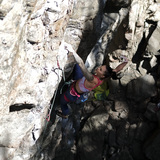 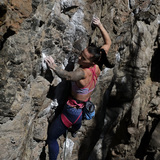 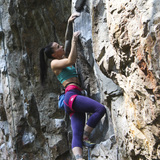 The main parking spot is at the Boat Club about 300 meters before the crag. A new extra parking is also located right next to the cliff, but there is only room for 4 cars here. DO NOT PARK ELSEWHERE ALONG THE ROAD, IT IS FORBIDDEN.

Parking is ONLY allowed at signposted parking spaces. It is not allowed to park along the road that passes the cliff.

If you go with public transport: Take the commuter train to Tullinge station (22 min from T-centralen (Stockholm), and then walk (15 min) to the crag from the station.
Stockholm Public Transport homepage (SL): https://sl.se/