in the area of Cala Gonone, Italy Maintained by Climbing Sardinia

"We found we were unable to take hire car up dirt path to parking described in guide books so we left it in Cala Gonone and walked in - takes a good hour or so, but worth it for very good climbing (even in light rain)."

First of all, DO NOT CLIMB IT IN THE SUMMER! Sorry, but we see too many climbers getting roasted at the Budinetto while many other crags are in the shade. The Budinetto is a pure winter crag. It is exposed to the south and gets the sun for most of the day.

Said that we can move on and depict the beauties of this crag. The wall at the Budinetto is gently leaning, populated with just over 30 routes ranging mostly from 5a to 6a. It is the perfect climbing sector for beginners and climbing courses. Many routes are 15 metres long, with an extension to arrive at the edge of the crag at about 30 metres of height. The rock though is not so easy to climb. It is a leaning slab with tiny holds, where balance and proprioceptive intelligence is more important than muscle strength. Climbing at Budinetto requires tact and elegance.

Also, the view from the Budinetto is spectacular. In one glance you get Cala Gonone, the gulf of Orosei and the sea cliffs that embrace it. Walking down to the car after sunset you may witness the sky colouring its lower strip of a deep violet tone, with a diffused pink edge below the deep blue. Dusk is one of the most spectacular and evocative moments of the day, and as seen from the Budinetto is one you won’t forget.

On the right side of the crag, there are 2 routes that were first climbed in Trad over 50 years ago. Anyhow, the crag was equipped as is today only in the nineties by many different climbers. Bigozzi was the first one who seriously held up his drill to create the first routes. The Alpine Rescue, the Italian Alpine Club and other climbing associations (Climbing Sardinia among them) use this crag for climbing courses and keep an eye on all anchoring points, making sure safety standards are always met. 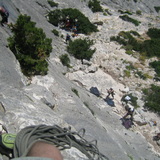 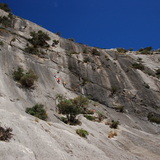 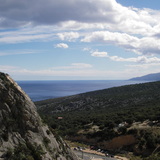 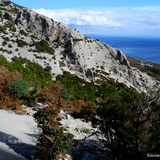 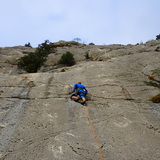