"Love it! My style of climbing, a lot of crimps and beautiful boulder lines! "

Magic Wood is best known for its very high concentration of hard boulders. The rock quality is gneis and it's generally gray. The friction is mainly good. Some problems have polished holds, but as the problems tend to be overhanging, the holds are usually still usable.

As the GPS positioning is not that accurate around the area, the boulders are spread in smaller chunks which are positioned correctly relative to each other. So when you recognize one boulder, you should be able to navigate around the block pretty nicely.

Magic Wood was discovered by a group around Thomas Steinbrugger while ice climbing in the valley of Avers in 1997. After private use and cleaning some major lines, more people got invited or found the spot.

The forest was (and still has some) magic in it. And by magic I mean that the rocks and the land is covered by untouched green moss and it's just magic everywhere. Nowadays there are paths everywhere instead of a single path going around the boulders.

So stay on the well trodden paths, don't litter and use the toilets at the camping, if nature is calling you! By behaving you save the Magic for the future climbers also!

Be aware that there is a clean up day once a year which takes normaly place after the final world cup competition in munich! So this year on weekend 25/26 august 2018. 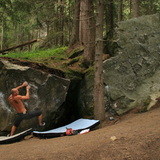 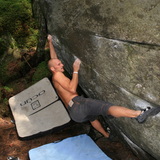 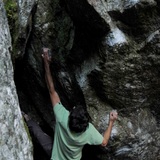 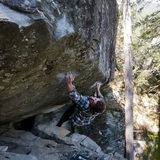 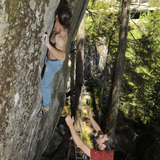 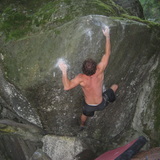 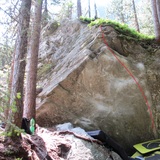 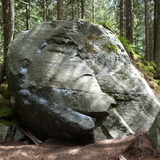 SLEEPING/CAMPING: Wild camping is forbidden. There's Bodhi camping area just before the village and Bodhi guest house at the Ausserferrera.

PARKING/ACCESS TO BOULDERS: There's two bridges. Lower goes from the Bodhi camping and upper one between the camping and Ausserferrera. There's big parking area next to the camping and very small one near the upper bridge.

BOULDERING AREA: Bouldering is allowed only on the marked area. Please check detailed map of the allowed area from the camping ground notice board or guide books.

LANDING: Many landings are rough. Often you'll need many crashpads and spotters.

GENERAL ACCESS INFORMATION: "To ALL the magic-hoppers… its even getting uglier and uglier. just too many people up there this summer. and like everywhere else with a lot of people the probability of getting some idiots there is rising and rising. some dont pay the camping, just camp “wild” in the wood, litter the place, agressive against the campgroundwarden, dont dare to say hello to anybody, no respect for nature, no respect for anything…. if the number of people (and the attached problems) are growing next year like it did this year, we have a good chance we will get serious problems with the local community and that everything will be shut down. SO its VERY important that IF you see BAD behaviour —> to tell te people that they are wrong. very often they just dont know it better cause they have no idea about living in and with nature at all!!!" (http://sloper.climbing.nl/?p=974)

Even in 2018 there are still problems with the local community. So stay on the parking lots, NO absolutely NO wild camping in the whole valley. Please pay parking or camping fee. Use Toilets on Bodhi Camp or Edelweiss Guesthouse. (http://cleanclimbcelebrate.org) Stay on pathes. NO fires and NO Graffity (like 2017!!!) Use your brain!!

There will be a CLEAN UP DAY organized by Bodhi Climbing once a year which takes normaly place after the final world cup competition in munich. This Year on weekend 25/26 august 2018!! So help and be part of the game!