in the area of Paphos, Cyprus Maintained by Cyprus Bouldering Project

This beautiful area on the west coast of Cyprus is a boulder jungle of mostly great quality sandstone with a potential of 500+ problems. This topo is a first effort to organise and identify boulders that have been climbed over the years and to encourage others to go out and enjoy them or add more problems themselves.

The bouldering experience in Ineia/Drousheia is second to none, with varied movement and style of problems on great rock. The height of boulders range from powerful low balls to monster highballs (many of which yet to be climbed) but the most common height is 3-5m. The boulders are generally well clustered together and access is mostly easy due to their close proximity to farmer's roads, with the exception of some short bush-wacking required for a few remote boulders.

The biggest difference to other areas in Europe is that you get great conditions all year round, in all but perhaps the hottest months of July and August. Even then however, due to the altitude (around 500m), this area is normally cooler than the rest of the island and you can escape the heat by climbing in the shade, early morning or late evening. The bouldering is set in a very peaceful and wild area of the island overlooking the Akamas Peninsula and Lara bay, with great views across the west and northwest coast of Cyprus, easy access to the beach and close proximity to traditional Cypriot villages of the Paphos region.

If you have climbed a new boulder in the areas of Ineia (Inia) and Drousheia (Droushia), please add it on 27 Crags as a suggestion and/or send an email to dpapakyriacou14@gmail.com, with the GPS coordinates, boulder image/line, a short description, name and suggested grade, and it can be added on subsequent versions. Feedback on improvements of this topo and opinions on grades are also welcome so please log/vote on climbs. Collective effort is required to clean boulders, landings and make some boulders accessible, so please reach out on dpapakyriacou14@gmail.com if you wish to help out with these efforts or get more info.

Proceeds from this topo will go towards equipment required to clean and develop new boulders as well as contribute towards local bolt funds.

The Climbing community in Cyprus is pretty small and you can imagine that the Bouldering community is even smaller. Over the years there has been sporadic Bouldering activity on the island, mainly seen as practice for roped climbing or at times when active climbers did not have a partner to climb routes but had time to kill. The development of bouldering in Cyprus mirrors the development of climbing in other larger nations, where the focus was initially on developing Sport and Trad climbing areas.

Most notable development was the organisation of some Bouldering Festivals in the 2010s (the last one being in 2015) by a group of some of the active core of climbers at the time, including members from the "Climber's Den" (a small cosy member’s wall in Nicosia which is still active today). Some participant names include: Andreas Parparinos, Andreas Theophanous, Agnes Phili, Marios Hadjipetris, Evagoras Xydas, Kyriakos Rossidis, and Xavier Otenblaaum, amongst others. The development however stayed confined to these festivals and never really took shape into establishing boulder problems or projecting harder boulder lines.

This changed when a strong and eager young bouldering specialist, Christos Sophocleous, decided to explore the boulders back home in the west of Cyprus in the area near Akamas National Park. Chris was nurtured in Glasgow's infamous urban bouldering scene at "Dumbarton rock", as well as the other prime bouldering venues of Scotland and mainland Europe, and who in a matter of 5 years of climbing experience, managed to redpoint "Sabotage" (Font 8A), one of Dave MacLeod's problems. So with abundant talent and power to spare, Chris started adding a few lines here and there on his infrequent short visits back home and establishing the first 6C-7B lines, before he managed to spark the attention of Demetris Papakyriacou, through his YouTube videos, who also lived and climbed in the UK but was also exploring many of the prime bouldering areas in the USA (Joshua Tree, Red Rock Canyon, Bishop and so on). Demetris on his short trips back home, with the help of Markos (local climber), then went on to repeat some of Chris’ lines, found new boulders and added a few lines in the 6s, to bring up the total tally to 50 problems.

The realisation was made that there was great undiscovered potential and quality in Ineia & Drousheia and eventually Demetris connected with Chris and together they started gathering all the info with the goal of eventually creating a topo and attracting more people into Bouldering.

Since Chris moved back to Cyprus permanently in 2021, with the sole focus to hunt for new boulders and establish new lines, the development saw a rapid increase, attracting more and more people to help with finding, cleaning and developing new boulders. Since then, a handful of people have been contributing new lines, adding a different taste and style of problems, helping to break the 200-mark. The most notable latest development was the establishing of Cyprus’ first proposed Font 7C /V9 (”Bahamut”), a steep line going through the roof of a small cave called “Stoma tou Drakou” (following its discovery by Florin Cimpoca). Most recently Cyprus also saw the send of "Pulp Friction", the first proposed 8A (V11) on the island and a sick-looking steep compression line. The hunt for new boulders of various styles and difficulty is still ongoing! 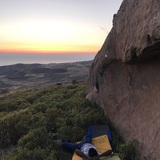 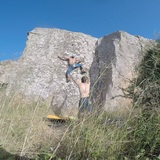 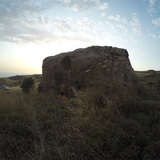 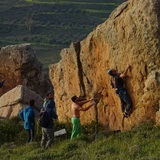 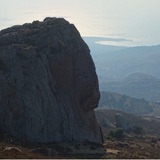 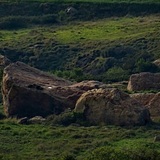 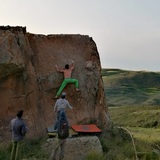 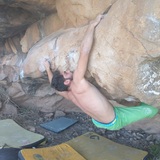