in the area of Kalamata, Greece Maintained by Indiou

A new rock climbing paradise is being developed in Laconia on Cape Maleas, since ancient times an important shipping lane and one that has often struck terror into the hearts of seamen. The cape is in the area known as Vatika, which is derived from the name of the ancient town of Vies.

Sheer rock faces rise up all around the cape, where a network of trails winds throughout the rugged scenery. Speliologists will find a number of caves scattered among the rocks, surrounded by the wide open sea bordered by peaceful coves.

The first climbing area is at Zobolo. The limestone face consists of terrain accessible for all levels of competence, with stalagmites, vertical rocks, crevasses, caves and many other features. It has great potential for competitive climbing, or traditional climbs of up to five pitches.

In all three areas there are routes of varying levels of difficulty. For those who like a challenge, there are more difficult routes on the Hioni area that have not yet been opened up.

Visit the amazing fossilized palm forest. You will find signs on the way to the crag

The quality of the rock is excellent and the routes have been well secured, making the climbs enjoyable and safe.

For climbers who simply wish to visit, the closest accommodation is in Neapoli. Good restaurants are to be found in Aghios Nikolaos, Profitis Ilias and at Rismari beach.

An ancient times it was a busy shipping lane, and one of the major routes for crossing from the northeast Mediterranean to the west. The cape was notorious for its bad weather at the time as well, most famously as recounted in the Odyssey. Homer describes how Odysseus on his return home to Ithaca rounds Cape Maleas only to be blown off course, resulting in his being lost for up to 10 years by some people's reckoning.

The Cape's importance declined with the opening of the Corinth Canal, which allowed ships to bypass the Peloponnese rather than circumnavigating it. However, it still has significant amounts of sea traffic as the Corinth Canal can only accommodate ships less than 21m in width.

In World War II, the German occupying forces began construction of a military tower for defense and surveillance of the major shipping lane. The construction was halted with the end of occupation in 1944. 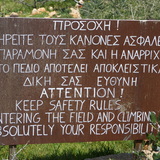 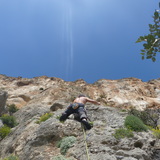 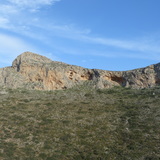 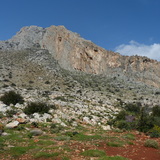 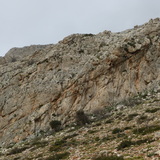 N. Strobl
from Peloponnese
Other Premium topos by Indiou