in the area of Skien, Norway Maintained by Bøklatring

A predominantly overhanging wall, this is a great place for climbers looking for challenges from around 7a and upwards. Also, the classic Kjempepupper (6b) is worth the trip out here alone. Located next to a swampy creek, the wall gets rather hot and humid on warm and sunny days, but it's still climbable due to high friction on the rock. You climb mostly on good holds, although there are some occasional crimps now and then. The climbing tends to lean towards the endurance side, but you can find some short and powerful routes, in favor of boulderers. Some of the grading might come off as hard, but eventually they make sense after you get used to the wall's style of climbing.

The overhanging routes can be climbed in light rain.

There is potential for expansion, as there are slabs and vertical walls further up in the valley that are suited for development.

This was once the hottest crag in the area (and arguably in the region) after it was established in the late 90s. It is unique for the area, with an overhanging section with several steep routes in the 7th grade. The crag has gotten notorious for its somewhat obscene route naming and stiff grading, but don't let that fool you. Pornocragget offers supreme climbing, and sending a route here often leaves you wanting for more. 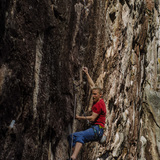 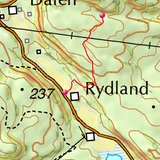 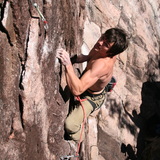 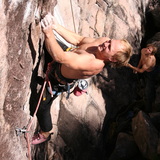 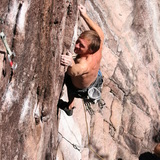