in Sweden Maintained by KjugeBloc

"Get your guidebook here! www.kjuge.nu"

🧗‍♂️ There are many climbing spots in Sweden, but Kjugekull is by many considered as one of the country's best areas for bouldering! It sits by Ivösjön; a large lake in the south of Sweden surrounded with numerous smaller climbing spots. Kjugekull’s large freestanding boulders are dispersed in dense clusters throughout the beautiful forest, making the area compact yet extensive. There are over 1400 problems to test your skills on, in all grades and styles – on perfect swedish granite!

Over the years Kjugekull has gotten the infamous reputation of being a bit stiff in the grades, sandbagged or just simply put: "Tough on the ego". There might very well be some real ground to that statement, but there's also a bunch of other factors which play a major role in the climbing at Kjuge. First of all the general style of climbing is rather technical and it can take some time getting used to the holds and the body positioning required. Second the rock is very friction dependent, meaning that you can cruise a climb in the winter and then not have a chance on it during the summertime. However, Kjugekull also has a rich history of sandbagging, especially during "the golden years" when the majority of the climbs were being put up. During this period no one wanted to stick their neck out and propose the lofty grade of 7C (much like the 'Bleausards' in Fontainebleau, who were reluctant to suggest the first 8th grade), this has resulted in an almost comical amount of pretty stiff 7B+ boulders. So, don't feel too bad if you get shut down on one of those :) 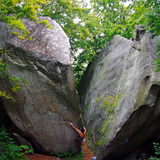 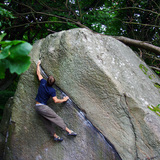 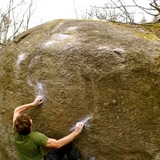 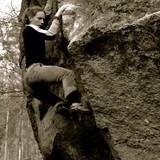 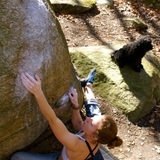 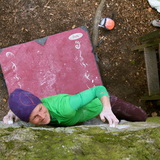 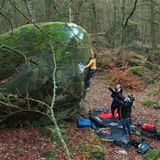 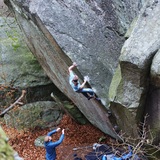 B. Iisager
from Copenhagen, Denmark

A. Ristinmaa
from Lund, Sweden

🚫 Camping is prohibited in the entire area (including the parking).
🌳 Kjugekull is a nature reserve – respect the vegetation and the wildlife.
🤫 In general try to keep a low profile.
🗑 Remove all of your trash!
🧹 Brush off tickmarks and excessive chalk!
🚽 There is a toilet close by the café. Use it when necessary!