in the area of Borgund, Norway Maintained by Team Sogndal

"A great and steep crag. Short and intense routes."

The cliff is incredibly beautiful and provides quality climbing. Parts of the rock is rainproof. The cliff lies by a field and close by a farm. The farmer is positive, but show consideration and limit the noise. Feel free to chat with the farmer. You park on the farmer’s property so make sure you do not block the road or park too many cars!

The cliff has been viewed by many climbers through Lærdalsdalen, but there were two climbers from Bergen who first found out the drill and bolted three lines. Several years later Ole Karsten Birkeland was contacted by the farmer as he wanted more climbing routes. Ole Karsten took Henning Wang with him and with bolts from Norwegian Climbing Association, several new routes were drilled up in May 2012. Arild Mandfloen, who for a period was a local climber, continued bolting several lines. 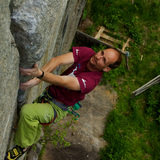 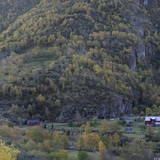