"The short cliff of Chouni on the entrance of the Chouni gorge on Mt Parnitha is a landmark of Athens modern sport climbing history as the hotspot of hard ascents during late 90s. "

— Athens Climbing and beyond
.premium

The short cliff of Chouni on the entrance of the Chouni gorge on Mt Parnitha is a landmark of Athens modern sport climbing history as the hotspot of hard ascents during late 90s. Today, the crag remains relevant for sport climbing in the range of 7a to 7c with many super classic lines. The crag is beautifully located on the outskirts of Parnitha National Park surrounded by a thick pine forest near the bed of the Chouni river.

Routes are short and steep, usually bouldery in character and running between 15 and 20m. The rock is solid grey limestone of the best quality. Difficulty grades tend to incline towards an older-school perception. Older routes have numbers on their base. To avoid confusion the guidebook follows the numbering written on the rock, using additional letters on newer routes.

The first confirmed climbing in Chouni is a toproping attempt by K.Tsouklidis and F.Stathis in 1988. That route was later (1997) bolted and named “Zulu” by G.Voutyropoulos. The first bolted line of the crag was “Hapakias”, opened in April of 1995 by A. Skevofilakas and G. Skaris. Many other soon followed (G. Potamousis, T. Michailidis, K. Roussos, Sp. Gkezerlis, N. Sakelariou, N. Voutyropoulos, G. Theoharopoulos and others) equipping the routes to their current form.

Since the beginning, Chouni has been pushing the limits of Athens climbing, reaching its highest point with the establishment and free ascent of “Faginos” by N. Sakelariou and K. Roussos (year 2000) and “Anorexia Nervosa” by N. Sakelariou in 2002 (the latter being the first 8a+ in Athens). On 2008, a maintenance initiative was sponsored and carried out, replacing many of the old bolts on the crag and establishing four additional lines. On 2013 A. Tsesmetzoglou and G. Voutyropoulos started a new maintainance initiative which continued in 2014. 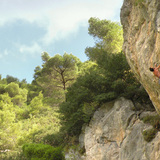 A. Chaziris
from Athens
Other Premium topos by Athens Climbing and beyond 33